A typical Orthodox Church is divided into three distinct parts: the narthex, the nave which is the main body of the building and the altar as the eastern end of the temple. The narthex symbolizes the created but fallen world, made by God and blessed as "very good” in the beginning, but in sin and alienated from the Source of Life, mortal, corrupted, decaying, dying. The nave constitutes the Church herself, the recreated universe, the mystical body of Christ. At its highest point, the dome is filled with Christ the Alpha and Omega, the almighty King and Lord. The altar area, joined to the nave by the iconostasis, reveals the Kingdom of God, the kingdom "to come," but in Christ and through the Church and her holy mysteries, the sacraments, a reality already accessible to faithful baptized believers. The west-to-east-axis of the church building constitutes the progression, world-church-kingdom.

Across the iconostasis there is also, on the north-to-south axis, another theme. The central, or "royal" doors, that are open or closed at various times, lead from the nave to the altar table or throne of God. On the northern side of these doors is an icon of the Incarnation, the first coming of Christ as a Child, born of the Virgin Mary in Bethlehem 2,000 years ago. On the right side of the Royal Doors is an icon of Christ as Lord and judge, as He will appear on the "Last Day," sometime in the near future. It is here between the first and the second coming of the Lord that the Chruch gathers, and meets Him Who promised to be with us always. In front of the Royal Doors, during the Divine Liturgy, the faithful receive the Eucharistic feast, the Communion of the True Body and Blood of Jesus Christ, and are united to Christ as members of His Body and Blood. At this point in the church building, the two axes intersect, "cross." The world, that is the created universe; and the Church in all her history, with all her saints; and the Kingdom of God yet to come but already present, encounter the living Lord Jesus Christ, who came, is present and will come again. 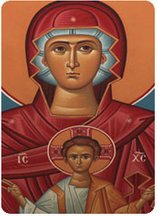 The striking feature of the icons continue around the walls depicting scenes from the Holy Gospel or Saints from past ages of sacred history. The icons are also placed on stands in the Church for veneration by the faithful. The word icon is derived from the Greek word meaning image. They are not decorative art, neither are they subjective nor sentimental, but windows into the spiritual world. Veneration is not to the paint or wood but to that other world from which shines Christ Himself, the "light that lightens every man that comes into the world" (John 1).

Candles are used extensively in Orthodox worship, on the altar and near the icons. These signify that same light of truth given by the Lord, illuminating the world with spiritual radiance. Candles are prayers, part of our offering to God, symbolizing our soul's burning love for God and His Church. There are usually no pews in Orthodox Churches. The faithful stand for the services as they are able, as participants and not merely spectators, in reverence and humility before the Living God. This also allows the freedom to bow, cross, and prostrate; allowing the body as well as the mind to become a participant.

Preserve The Beauty of Thy House