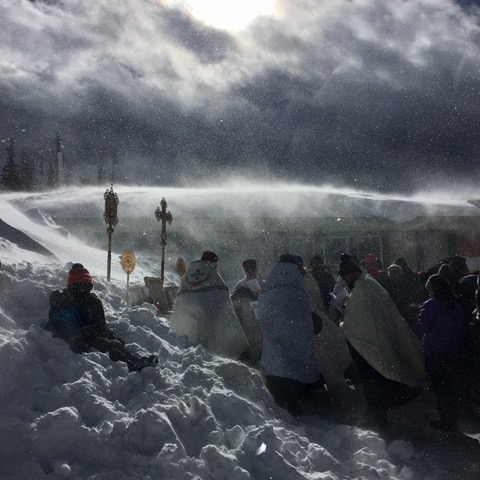 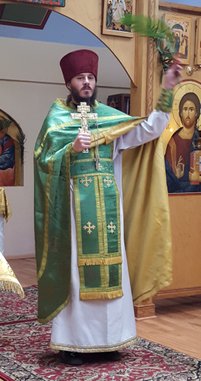 And thus we have the meeting of the Holy and All-praised Andrew the First-called of the Apostles, with our Lord and Savior Jesus Christ. In introducing the Orthodox parish of Saint Andrew the Apostle, I would echo that phrase of Our Lord, repeated a few verses later in the Gospel of Saint John, when Philip evangelizes Nathaniel, of "Come and see!". But let me tell you a little of what to expect if you were to be among those who "came and saw" here in Delta.

First of all, Delta. Delta, although a small American town, can be seen figuratively much as the area wherein the above dialogue took place. Delta is an oasis. Delta is a small oasis surrounded by the rugged natural beauty of the Western Slope of Colorado. The town is situated in a river valley, a "delta" surrounded by mesas and mountains. There is a consistently mild, dry climate with lots of sunshine. Due to the sheltering protection of the mountains few severe storms make it across our path and so the weather is generally stable, predictable, and as we pray for in the Divine Liturgy, seasonably favorable. There are four definite seasons each with its own rich beauty. From Delta you might within an hour or so visit nearly every kind of terrain and resplendant beauty that the Rocky Mountains of Colorado can offer. This ranges from the ostensibly dull and barren, yet refulgent in its own way, high mesa deserts, -- in which turning around you might almost expect to see Saint John the Baptist --to the high mountain alpine meadows alive with the breathing of the aspen trees, elk, and wildflower. There is abundant river water, the occasional awe striking thunderstorm, and plenteous fruit, vegetables, and even a few local wineries. In many ways, an "oasis."

But the real font of the oasis is the Faith and worship in the One, Holy, Catholic and Apostolic Church, established by Jesus Christ, once and for all delivered to the Saints, and planted by the grace of God, as a vine of His Vineyard in Delta, Colorado. Although Delta is a long way (by car) from any metropolitan center, it is alive with the faith that has established the universe. Admittedly, we are among very precious few Orthodox Christians in this part of the vast West. So how did we get here? 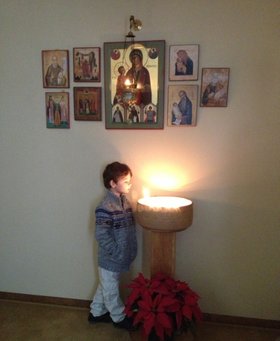 Over the generations, there were few Orthodox Christians, of Greek background, who came here as sheep herders. In their own quiet way there is no doubt that these early isolated Orthodox Christians were the "fragrance of Christ' (2 Cor 2:14). These were joined by other founding members, converts to Orthodox Christianity who were striving and seeking to discover the Apostolic Faith of the undivided early Church. Therein was the seed which was to become Saint Andrew's Orthodox Church. They reasoned that since Orthodoxy was what it claimed to be, that is, the One, Holy, Catholic, and Apostolic Church, there was no reason why there should not be an Orthodox Church in Delta. In the early 1980s, the task begun.

His Grace, Bishop Kallistos of Denver (at the time), visited Delta, and on the Feast Day of Saints Constantine and Helen, received the first Orthodox Converts of Delta, Frederick and Margaret Fowler. The Fowlers, along with Andrew and Athena Thiliveris, Athena Brown, and Sophia Peterson became the nucleus, and thus was Saint Andrew's Orthodox Mission begun. Through the months that followed, arrangements were made through Fr Andrew Harrison, also of Denver at the time, to assist in establishing a mission in Delta. The first Divine Liturgy for the new mission was celebrated in the Fowler's garage office. On the Feast of Holy Ascension in 1981, His Grace, Bishop Basil of San Francisco (at that time) visited Delta and blessed the temporary Altar Table. Later that same year there was official acceptance of the Mission of Saint Andrew the First-Called Apostle as a mission of the Orthodox Church in America, and the first parish council was appointed.

Building lots were purchased, consultations were made about design, and the construction of a new temple was begun. Read between the lines here: much hard work, much honest sweat, great generosity, abundant sacrifice, definitely tears, and fervent hope and faith in God's tender-hearted blessing. And by God's grace, the permanent temple was built and the Altar consecrated by the then Primate of the Orthodox Church in America, His Beatitude, Metropolitan Theodosius, in 1984. In the years following, a parish hall and rectory were added, built by the generosity, prayers, and dedication of those same founding members who recognized that the "pearl of great price" (Matt 13:46) must be offered everywhere, including Delta, Colorado. 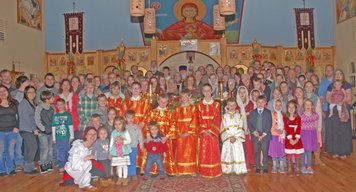 And so, what do you see now upon visiting Saint Andrew's Parish in Delta? You see eighty or so persons under the archpastoral care and love of The Bishop San Francisco and the West, striving still to be that same "Fragrance of Christ" by which Saint Paul so aptly refers to the living of the Christian life and the sharing of it with others in evangelism. Half are youth ranging from six months old to young adults, many are middle age and we have some of our original founders, our respected elders, among us as well. If visiting you would see a liturgical cycle of Divine services of Great Vespers or Vigil for Sundays and the Twelve Great Feasts, as well as other daily and weekly Divine Services. We have our Sunday meals, our socials, our fund-raisers, our Church Schools and Summer Church Camps. We are charitable locally, nationally, and internationally. We are active in our deanery and in our diocese. We keep the fasts, we celebrate the Feasts. We struggle, we pray, we take to heart the Lord's commandment: "Be ye perfect as your Father in Heaven is perfect...Take up your Cross....Come and follow Me." (Matt 5:48; 16:24) We seek to be Christian evangelists by acquiring the virtues of Christ, becoming the "savour" of acceptable sacrifice (Ezra 6:10; Matt 5:13; Eph 5:2). The Faithful of Saint Andrew's strive to be faithful.

There have been in Saint Andrew's history numerous people received into Christ's fold who had previously not been acquainted with the Orthodox Church. These, together with other faithful Orthodox Christians from the area and other localities, form our parish community. There have been numerous Baptisms and Chrismations, weddings, funerals, and countless Divine Services offered in prayer to God. Everyone who has passed through her doors into Christ's Holy Church have been introduced to Orthodox Christianity, true faith and worship in Jesus Christ, through a small parish in the western wilds of Colorado, some two thousand years and many thousand miles from where those words "Come and see" were first spoken to the Apostle Andrew. They came and saw. Glory be to God for all things.

Our local parish of Saint Andrew's was established about thirty years ago. It is a parish of the Orthodox Church in America, in the jurisdiction of His Eminence, Archbishop Benjamin, in the Diocese of the West.